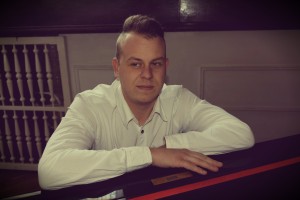 Michał Ratkowski is Polish composer, best known for his work in video games.

His game credits include 60 Seconds!, Terrordrome: Reign of the Legends, Bad Dream Coma, Uboat, and many more.

He began composing while music education at F. Nowowiejski Academy of Music in Bydgoszcz (Poland). Shortly after, he started scoring his first projects.

Some have described his sound as „ethereal”, „ghostly”, and „other-worldly.”
His warm command of the orchestra can pull out the emotion of the audience, or give a grinding edge to the media which it supports.

Michał began musical education with piano lessons when he was 5 years old. He has always had a love for music and brings his passion to every project. He’s always open to talking with new producers and directors.

Since 2011 is owner in „MICHAŁ RATKOWSKI – USŁUGI TWÓRCZE-KOMPOZYTORSKIE” (music company in Poland).
The company is a professional audio support for games, movies, animations, etc.